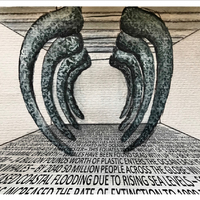 As part of a generation subjected to endure indefinite affliction from Anthropogenic effects as a result of past and current human activity, I have centred my practice around the depiction of the environmental degradation that is prevalent throughout this epoch.

Following on the work set out by Gustav Metzger of the late 1970s, I aim to continue highlighting the major contemporary environmental issues that still exist today, with a particular emphasis on the impacts of capitalist consumption. Through exploration into the magnitude of waste production and the consequential impact our ‘four planet lifestyle’ has on the natural life around us, I have created work to put ourselves as humans into perspective of the crisis.

Cognisant of the presence of waste that exists throughout the city, I work with found objects that relate back to the urban environment; an alternative to creating additional waste. In order to promote a more sustainable way of living, I aim for my work to create a sense of shock and to educate viewers, with the hope one will undertake more conscious actions regarding the preservation of the environment.

My most recent work consists of proposals for my degree show exhibition that focuses on the depletion of marine life, as a result of unsustainable and over-consumption. Alarming statistics printed on the floor would be accompanied with four pairs of to-scale whale bones suspended above, forming an archway for viewers to walk through. The dwarfing of ourselves against the sculpture is set to address the devastating and fatal consequences consumerist waste has upon the largest mammal on Earth. HDPE, a common household plastic that continues to pollute seas, would be moulded into structures replicating that of a whale's bone marrow, resulting in a ghost-like, semitranslucent plastic skeleton.