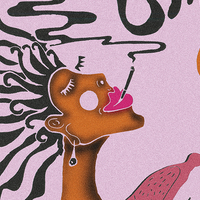 My work deals with the relationship between music and visuals within a psychedelic field. This project originally stemmed from the idea of making a visual alphabet that would represent different sounds, for the creation of album covers and a music video. However, through its natural development, the characters turned into 3D models that both represent sound and resemble musical instruments. The Project is named 'Sonorous' as I felt this best summed up the idea of the work and sounded like a believable name for a modern psychedelic album, by a band called 'Blobular'. The band and the album are fake except for the piece of music I made for the music video. To bring the models to life I animated over photos of the models, using TV Paint, with the idea that what was coming out of the models was liquid living sound. My project after this involved the same process to make a music video for a real Brighton based Psychedelic band named Wax Machine. However, this music video is still under construction. This project was designed as a test for myself to see my own capabilities in the music design field, and I believe 'Sonorous' to be an example of a new form of visual language for the visualisation of music.