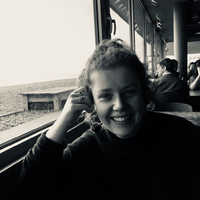 Over the last four years, I have studied and explored a wide range of creative pathways. This journey has led me to the use of drawing through printmaking and a growing interest in drawing as a socially engaged documentary practice. With an increased awareness of environmental issues and having adopted a plant-based diet during my time at university, I was keen to make similar connections within my practice. Initially exploring issues surrounding consumerism and supermarket sustainability, I stood and drew in many of the major UK supermarket chains around Manchester, capturing and documenting elements from overabundance of food to energy waste from open fridges. Continuously returning to the same question. How can we shop sustainably?

In 1995, a fruit and veg stall opened on a crumpled sidewalk, on the edge of a busy city centre. Local produce for local people. Today, it competes with supermarkets, take-aways, vending machines and apps. Initially set up by the fondly named Nick Banana to feed the students of Manchester, ‘Have a Banana Trading’ also now serves the staff and patients at the local Manchester hospitals. Their aim, to make sure one day every hospital in the UK has a fruit stall.