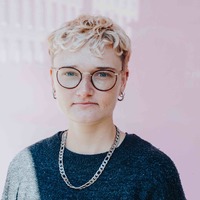 Through my work I aim to evoke emotion, utilising films’ ability to impact upon the audience’s senses. Whilst our experiences differ, emotions are universal. Therefore I aim to create visceral films that place the audience within the experience of another, encouraging understanding of others from an emotional perspective.

Justin, What Have You Done To Us?

We were fragile, fanatic and fourteen. Join us in the insane world of teenage obsession as a group of fans carry out a ritual to rid themselves of devotion to their teenage heartthrob, Justin Bieber. Cauldron's, chanting and cheese fondue...are you ready?

Two years ago I was wearing a dress when a group of people started shouting at me “Are you a boy or a girl?” This film was the first time I wore a dress since then. The film expresses the dysphoria felt when asked this question.

As a digital artist I am interested in utilising technology to transform simple footage into playful and dynamic visuals. This film began as a video of a carrot on a string. From there I set out to test my own ability to use technology as a transformative tool for artistic expression.