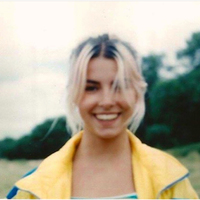 The running themes throughout my filmmaking practice are identity, memory and place. I find these subjects very interesting to explore as I believe they are pivotal in forming your identity as you grow. Therefore, my filmmaking ususally takes the form of a documentary, or an artist film as I look at exploring how memory shapes us in different ways.

I also tend to work using physical film, VHS and HI-8 tapes as I love to incoorporate archive footage into my films. I also find that the level of nostalgia found in old home videos is perfect when exploring themes of memory. In addition to working with physical film, I have also been developing my skills in hand drawn animation which I have incoorproated into my documentaries to add another level of physicality.

I recently completed my graduate film, 'Chasing Strays', which is an artist documentary about the post Yugoslav war generation living in Serbia. The documentary explores their early memories and their thoughts on growing up in a now divided country. I am half Serbian and half Croatian, and was raised in the UK so I wanted to focus on something personal to me and my cultural identity. My intention when making this film was to promote the narrative of a new generation in the Balkans and to make a film that wasn't specifically about what happened in the war. I wanted to explore the naivety of being young and sheltered from politics and conflict and how our cultural identities are shaped by this today.