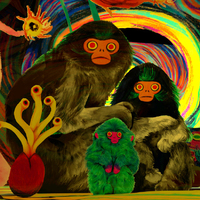 My third-year project Buko’s World has been based in exploring the use of hand drawn illustration within immersive technologies. Buko’s World began with a drawing of an alien monkey baby which I decided I wanted to create a world for. I aimed to design a fully functioning world of organisms and habitats which an audience could experience tangibly. This led me to pursuing virtual reality as a medium. Through virtual reality I could actually build the world and have an audience actively experience it. Furthermore, I have been focusing on how I can keep my hand drawn illustrations integral to the work whilst using immersive technologies. I have spent the last year learning how to use computer software such as Maya and Unity to build and animate the world. All of the organisms, scenery and monkeys are hand drawn illustrations which I have taken into the 3d space. The overall end goal with the project is to create a fully functioning, animated experience in virtual reality. Although I no longer have access to the equipment, I am still working on creating 360° videos for online platforms.

Moving forwards after graduation I hope to continue exploring animation within immersive and interactive technologies.