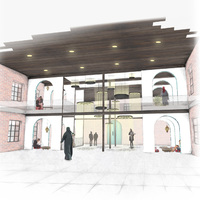 The aim of Masaar is to aid foreign integration into Manchester whilst reducing the risk of culture shock and isolation. It is a student residence catering for Middle Eastern students coming to the UK for the first time and for non-Middle Eastern students with an interest in learning Arabic and familiarising themselves with related cultures.

The Middle Eastern design elements include geometric pattern, tiles, Islamic blue, lanterns and wood panelling, making the jump to a different culture and place less daunting and them feel in a safe and familiar place. The industrial components retained or highlighted, such as exposed brick, window frames and open plan, giving an insight into Manchester’s past.

A mixture of English and Arabic signage is used throughout the building encouraging residents to explore relevant languages. In order to cater for the religious requirements and preferences of those of Muslim faith, Masaar offers prayer rooms, a female only gym, salon and area – amenities which would not be readily available in regular student residences.

Having non-Middle Eastern student residents also helps ensure that the Middle Eastern residents do not become marginalised and have the opportunity to make friends with those from different cultures and backgrounds without putting themselves in situations in which they are not yet comfortable. The ability to meet in an area that celebrates different cultures and common interests creates understanding and empathy between groups of differing backgrounds, providing a pathway to wider integration.