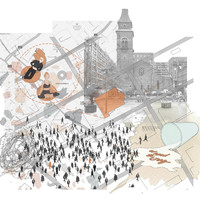 One of the main aspects that influenced me to study interior design was being able to enhance the quality of people’s lives, through improving and adapting the way spaces are used. I am particularly interested in residential projects, as I believe it is important that the space where people spend the majority of their time, is designed in accordance with their specific needs and requirements.

Improving the quality of people’s lives was a crucial aspect of my final major project ‘Sanctum House & Social’. The key focus was on enriching the lives of people with the hidden disability, Dyspraxia, which is a condition that affects people’s movement and co-ordination.

The aim was to create a small co-living community for people that have Dyspraxia, who wouldn’t usually have the confidence to co-live due to their hidden disability. It was also important to make the scheme more inclusive to the wider Dyspraxia community through ‘Sanctum Social’, which is a space for people with Dyspraxia to do exercise classes, attend support groups and socialise in a comfortable environment.

As an interior designer I strongly believe that everyone should have the opportunity to live in a safe and comfortable environment. This requires residential properties to be designed with residents’ specific requirements considered from the start of projects, rather than being adapted as an afterthought at a later date.